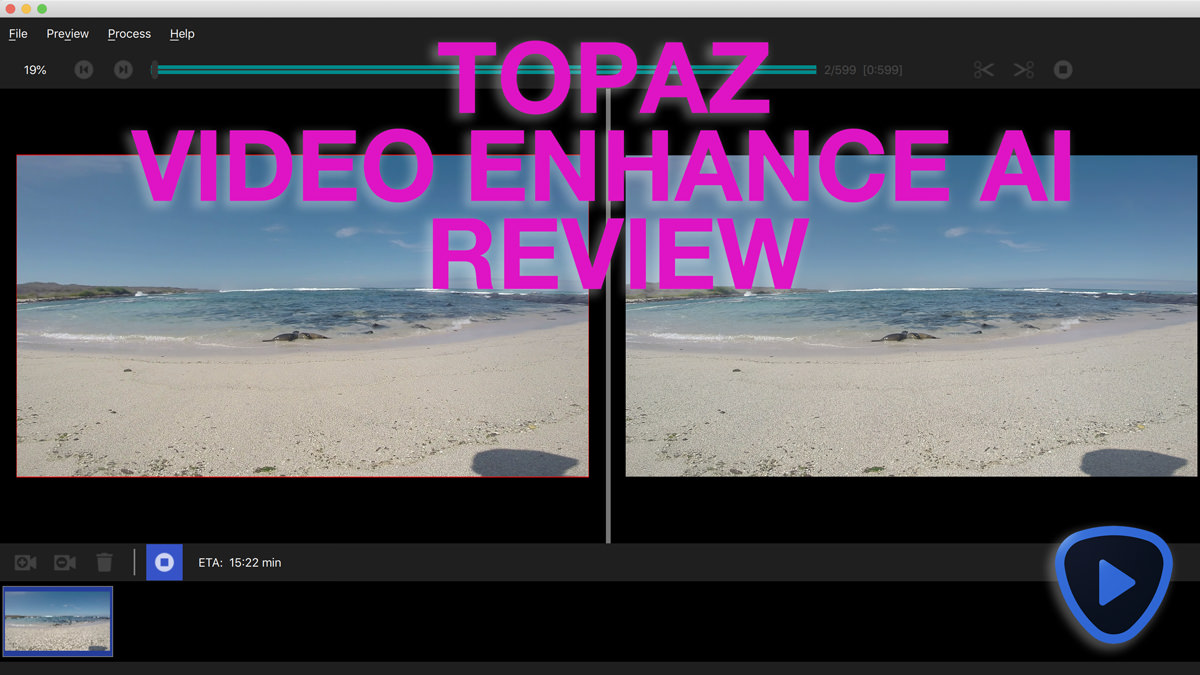 Planning to buy Video Enhance AI? Follow this link and use coupon code aperlust for a 15% discount.

Why You Would Need Topaz Video Enhance AI

There are 4 common scenarios a person would need to enlarge a video:

1. Display screens are moving to UHD resolutions. If you are a content creator, or just want to show some videos to your friends or family, then UHD will provide a better viewing experience in terms of quality.

2. There is also the SEO benefit of UHD videos. For instance, YouTube users have the option of searching for videos in 4K. Uploading 4K content will increase your video views.

3. Convert old TV shows like Star Trek or Full House to HD. Many older TV shows and movies are in standard definition with interlacing. Upscaling and enhancing them to progressive video will highly improve the quality.

4. Videos downloaded from mobile apps such as Facebook Messenger or WhatsApp have standard definitions.

This is a common issue when you friend records you doing something that is video worthy like a snowboard trick with their phone. And if that friend shares the video with you via WhatsApp, then the video will most likely be SD (due to downsizing to save space and bandwidth) quality even though it was recorded with a smartphone that has 4K recording.

Of course, you can always ask your friend to send the video via email. But maybe it was an acquaintance that sent it to you and it’s too much to ask for an email send.

Here are some definitions of common display resolutions:

In my test cases, I used old video footage that I recorded using a GoPro Hero 3 Black at 1080p resolution.

The video quality isn’t the greatest but sets a good benchmark.

Also, no editing such as lighting or color corrections were done to the videos other than cropping and upsizing.

The videos were upsized from 1080p to 4K resolution.

I viewed the quality of the original videos and the 4K videos on my 5K iMac at the native resolution of 5120 x 2880 pixels and also at my working scaled resolution of 2048 x 1152 pixels.

The 4K video has a noticeable improvement in detail.

In order to notice the quality of the videos, I recommend pausing the video at different times. You may also have to view the video at full screen.

Note: In order to view video in 4K or higher, you need to have a 4K resolution display or higher.

The processing models have changed since the initial release of Topaz Video Enhance AI. You may have noticed them in the other photo.

As of December 2021, Video Enhance AI has several upsizing models organized into 4 groups:

I’ll explain a couple of the terms for the upscaling or enhancing models that may sound confusing.

The p in 1080p stands for progressive. NTSC analog television signals are broadcasted in 480i (interlaced).

When I initially reviewed Topaz Video Enhance AI, it was not optimized for Mac.

It took about 5 hours to enlarge and process a 10-second video at 1080p (60 fps) video to 4K. I just ended up letting the upsizing complete overnight.

The reason Topaz Video Enhance AI was slow on Mac is it required an Nvidia GPU which Macs don’t typically have but is readily available on Windows. The software relied on the integrated GPU and eventually the CPU to render the videos on Mac.

The recommended GPU is Nvidia 1080 GTX 8GB or better. You’ll need to make sure you have the latest Nvidia driver installed.

You can view the system requirements here. But to cut the chase, Topaz Video Enhance will require an Nvidia or AMD GPU with a modern CPU. The new M1 chip from Apple is supported.

It actually took me over 24 hours, with my iMac and unsupported AMD GPU to enlarge a 61-second video from 1080p to 4K with version 1.1.1. But this was the past.

With the latest updates to Video Enhance AI v2.2.0 in 2021, Topaz Labs made significant improvements to the software, especially to rendering times. Even better, it now supports AMD GPUs on Mac.

What used to take me hours to upsize a video with Video Enhance AI on my iMac, I can now render them in a few minutes. That’s progress.

If you have a  60-second video at 30 fps, and Video Enhance AI processes at 30 sec/frame, then your video will take 15 hours to enlarge. If the video was recorded at 60 fps, then it would take 30 hours. These are only estimates and can vary widely. Remember, this is on my iMac and not a Windows machine. For comparison and according to Topaz Labs, on a Windows machine with Nvidia GTX 1080, it usually takes 3-4 seconds to process each frame from HD to 8K. Video Enhance AI is far more superior on Windows than macOS.

When Video Enhance AI used to be slow for Mac. Now it’s faster.

I also noticed a very slight color shift from my 1080p to 4K video. You should be able to notice it in the video. It’s not a big deal since the color isn’t super off but you can always adjust it in post which most videographers do anyways.

Follow this link and use discount code aperlust for an additional 15% off.

You can try a 30-day, fully operational Video Enhance AI for free without a credit card

Topaz Video Enhance AI works. And now it’s faster on Mac. Really fast. Before I could only recommend it for Windows, but it’s now good to go for macOS with AMD and M1 GPUs.

If you’re working on a video project that requires video enlarging with Windows or macOS, then this product is a great fit. It’s the best video ai upscaling software on the market.

The Topaz Video Enhance AI for Mac was only released on March 5, 2020. I expect them to resolve this Nvidia-GPU-only issue since it will decrease revenue. Topaz Labs actually resolved this statement I made in 2020.

However, enlarging videos is a CPU/GPU intensive task, regardless of the operating system or GPU compatibility. Therefore, a mid to high-performance computer will be required. Remember, the software is working pixel by pixel, frame by frame. Furthermore, upsizing video from SD to HD will be faster than HD to 4K.

One license of Topaz Video Enhance AI can be used on both a Mac and Windows computer.

If you end up downloading the software with the 30-day free trial, please let me know its performance in the comments below. It’ll help other consumers.

If you’re looking for an image enlarger, then you should check out Gigapixel AI. It works well on both Mac and Windows. You can read the Gigapizel review here.

Let me know if you still have any questions from my Topaz Video Enhance AI review in the comments below.

What is Topaz Video Enhance AI?

Topaz Video Enhance AI is a video enlarging software developed by Topaz Labs. Its was first released in March 2020 and currently version 2 is the latest. The software can improve video quality in standard definition videos and upscale them to 8K. Video Enhance AI is available on Windows and Mac, and requires a GPU.

Yes, the software is great at upscaling videos to HD or UHD. Video Enhance AI is probably the best consumer software to enlarge videos from standard definition like 480i to 4K or 8K. It can also upscale interlaced videos that were originally on TV. You can also try the software with a 30-day free trial.

Topaz Labs used artificial intelligence (machine learning) in Topaz Video Enhance AI to determine detail and noise in videos before upscaling them. This allows the software to upscale only the required data needed and not increase noise or reduce detail.

How to use Topaz Video Enhance AI

1. Import video(s). Import video by dragging them from the folder into Video Enhance AI.
2. Crop start and endpoints of footage if needed. Use the curly brackets icons to crop the start and endpoints of the video.
3. Select one of the rendering AI models for upsizing. You can either manually select the AI processing model or allow Topaz Enhance AI to recommend the best model
4. Choose output dimensions – usually will be UHD. Select the preferred final size of the video up to 8K.
5. Choose output format. Select the desired final file type – usually will be mpeg4 (.mp4).
6. Click on ‘start processing’ to begin upsizing. The software will take several minutes or hours to finish enlarging the video.
7. Enlarged video completed. The enlarged video will be located in the same source folder.