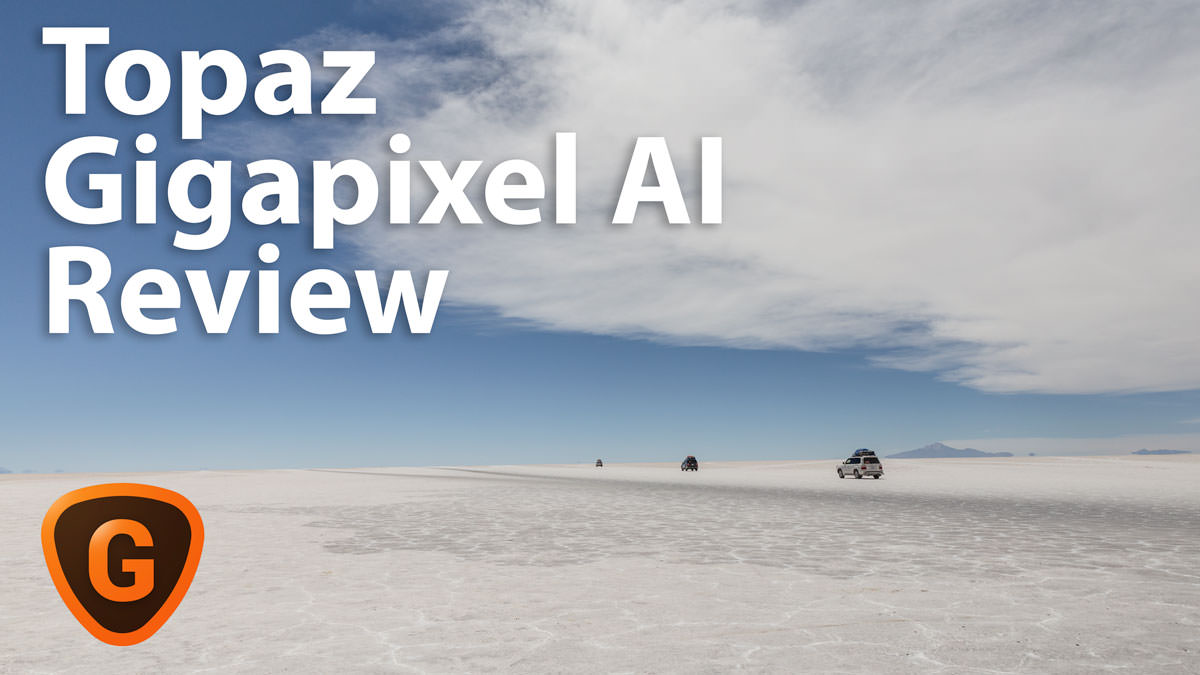 Topaz Gigapixel AI is an advanced image enlarging software that uses artificial intelligence to upscale photos by up to 600% without losing quality. In many cases, it enhances the final photo by restoring detail with the extra pixels.

Related: You should also check out Topaz Photo AI, which also enlarges images.

In my Topaz Gigapixel AI review, I will provide you important information on how I tested the software and my results.

But first, why would you need to enlarge a photo?

Now let’s dive into the case studies. To test Gigapixel AI, I first used a 4032×2268 JPEG image that I photographed with my Samsung Galaxy S8. I enlarged the image by 600%, which is the largest size the software can produce.

I was surprised by the quality; it’s actually good. I did notice halos along the horizon on the enlarged photo but there were already some artifacts in the original horizon. But it is only noticeable when you really zoom in.

Another thing I noticed is when you zoom in on the original photo, it looks pixelated — as expected. On the other hand, when you zoom in to the same area on the upscaled photo, it looks painterly. Keep in mind the original image quality is not great in terms of professional photography standards. I did take it with a mobile phone while on a boat (think moving platform).

However, this image is good to set a floor quality for Gigapixel AI. To compare the images yourself you’ll need to see the original and expanded files. The enlarged photo is a whopping 183 MB which I’m not going to load on this blog post. Lastly, I used a 5496×3670 TIFF image (originally a DNG image) and expanded it by 400%.

The results were amazing. Not only was the final image still sharp, but the noise was also reduced. See the before and after. The final image is an insane 1.80 GB.

Topaz Gigapixel AI also has face refinement. When enabled, this feature will enlarge small faces (16×16 to 64×64 pixels) with more detail and sharpness.

A few important notes about Topaz Gigapixel AI: Gigapixel caps the upscale by either height or width to 22,000 and 32,000 pixels for TIFF and JPEG outputs, respectively. So, you can’t enlarge everything by 6 times. I tried enlarging a RAW file. The software will not output a RAW file.

Also, Gigapixel’s RAW rendering is not good. The color and contrast look washed out once completed to a TIFF or JPEG file. I tried correcting the color and contrast by playing with the color settings and spaces in Photoshop but it didn’t work. If you want to enlarge a RAW file, I suggest saving the image as a TIFF file then use Gigapixel to upscale to TIFF.

In addition, it doesn’t support TIFF layers. If you were to enlarge a TIFF file that has layers, then the layers will be merged. Gigapixel AI is GPU intensive. It can sometimes take 5 to 10 minutes to process an image. This isn’t a bad thing, since you can do something else in the meantime.

The software has batch processing if you want to process hundreds of images. This will take a while. There is no option to customize resolution ppi during output.

I also tested the facial recognition feature. I used a 640×1030 pixels image of a woman sitting down. The size of the face is small relative to the rest of the image. I enlarged the image by 6 times and compared the details of the before and after face. Gigapixel AI’s results are acceptable.

Gigapixel AI does not support Intel HD Graphics 4600 or lower. A minimum RAM of 8GB is required. 16GB is recommended and 32GB is optimal. Internet connection is required to log into the software. We found the software works with CPUs Intel i3 and Ryzen 3, but from our Topaz Gigapixel review, it’s recommended you get a faster CPU.

On June 25, 2020, Topaz Labs released Gigapixel AI version 5.0.0. This update includes an improved model for better upscaling, view previews as a single image, new zoom options; and a new man-made mode to better boost the details in typography, architecture, cityscapes, and other images with defined outlines and sharp edges. I quickly tested the man-made mode on typography. I noticed the type was noticeably improved. You’ll notice some smudge on the type, it’s because I used blend modes.

Topaz Gigapixel AI is a great product and it does the job, unlike many free online image enlargers which are limited. I also did a quick test and compared it to Photoshop’s image size tool. I have to give a slight edge to Gigapixel AI because its noise reduction on upscaling is better. Furthermore, Gigapixel AI can be used a plugin with Photoshop and Lightroom.

If you’re looking to enlarge a video, then read the Topaz Video Enhance AI review. Have you tried Gigapixel AI? What were your results?

What is a gigapixel?

What is Topaz Labs?

Topaz Labs is a software development company that makes a suite of photography applications including plugins for Photoshop and Lightroom.

What does Gigapixel AI do?

Topaz Gigapixel AI is an image-enlarging software that uses artificial intelligence to accurately upscale your photos up to 600%.